Charlotte Priddy, from the 2016 cohort, along with her PhD supervisor, Stuart Clarke, published a manuscript in the journal ‘Sedimentology’ in 2020, entitled “The Sedimentology of an Ephemeral Fluvial-Aeolian Succession”. This paper was 1 of 15 chosen as an Editors Pick by the editorial board from all manuscripts published in Sedimentology in 2020 as an example that showcases good practice, innovative approaches, and noteworthy advances in sedimentology.

The paper details the sedimentology of an ancient arid ephemeral fluvial system of the Lower Jurassic Kayenta Formation, across southwestern USA. The study uses detailed sedimentary logging, palaeocurrent analysis and photogrammetric panels across the regional extent of the Kayenta to develop a generic model that accounts for the detailed sedimentology of a sandy arid ephemeral fluvial system, along with analysis of the spatial and temporal interactions with the aeolian setting. 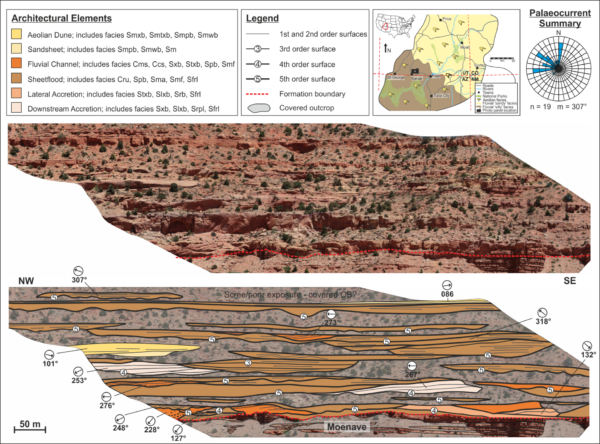 Example of photogrammetric panel from the paper

The study concludes, ephemeral fluvial systems within arid to semi-arid climates are dominated by fluctuations in discharge and sediment supply. The fluvial style is highly cannibalistic and dominated by vertically and laterally amalgamated channel and sheet-like elements and comprise sediment of aeolian source. Little overbank is preserved, and the regional-scale depositional system shows waning flow and a decrease in stacking of fluvial channels and sheet-like elements, similar to that of a distributive fluvial system or terminal fluvial fan. Ephemeral systems preserve unique deposits that are dominated by upper flow regime structures such as upper plane beds and antidunes, and high sediment load structures such as recumbent cross bedding and mud-draped foresets.

The interaction of the fluvial system with neighbouring aeolian environments impacts greatly upon the sedimentology observed within the ephemeral fluvial setting. Fluvial architectural elements are dominated by fine to medium-grained aeolian-sourced sandstone, providing an almost uniform grainsize distribution, with the exception of very coarse-grained to granule conglomeratic basal units. High width to depth ratios are observed for channel and sheet-like elements as a result of high sediment concentrations and minimal vegetation during the dominance of the ephemeral fluvial system, however, during more arid times when the whole system is drying and the aeolian dune field expands, fluvial channels are confined to interdunal corridors resulting in lower width to depth ratios and channel sedimentology dominated by flash-flood and debris facies.

Consequently, characterisation of ephemeral fluvial systems requires specific facies models that are strongly influenced by coeval sedimentary systems. The model derived from the Kayenta Formation represents an ephemeral sandy braided fluvial model for an arid to semi-arid, aeolian-influenced setting. It describes an ephemeral fluvial setting that lacks significant fines and in which typical fluvial facies, comprising well-rounded, well-sorted, reworked aeolian sediment, stack into vertically and horizontally amalgamated extensive sandstone bodies with high reservoir or aquifer potential. The proposed model shows differences in architecture and composition from previously published models. It also provides useful generic geometrical and compositional details for the characterisation of analogous settings in the subsurface where the key sedimentary detail can be extracted from only 1D core, and it offers a means of extrapolating 3D geometries of architectural elements to characterise the subsurface beyond and between well control. 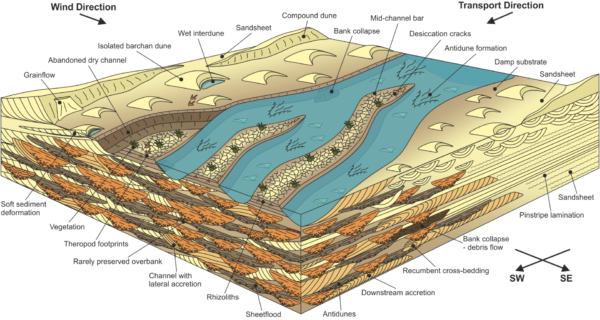